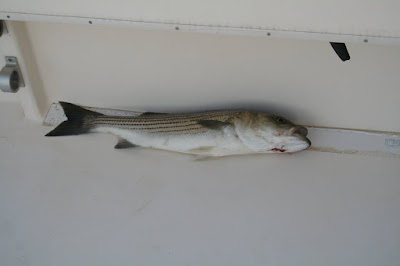 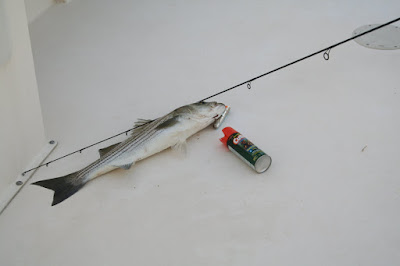 The weather this past week has been more typical of the picture perfect evenings of late August. I had the pleasure of taking my oldest daughter Katie, her boyfriend Charlie, and best friend Shaunie, out thursday night for a little topwater seminar. The humidity was low and the skies blue but we faced a bit of chop. We landed 1 barely legal rock to go with 2 lost plugs, one hook to the scalp, and several massive birds nest. We meandered in to a full moon and several cold ones. A great night with some great kids.
As I sat on my deck overlooking the glass of the South River with zero boat traffic, I was anxious to go fishing, so got an early start tonight. Arrived at the spot around 6.30, just as Mako Bill was pulling up his anchor. He offered me his spot and I quickly anchored. He tends to fish a tad bit more towards the lighthouse where the rocks drop off a few feet. I had very good luck there on sat and sunday, so I figured "what the hey". He has fished "the spot" a lot longer than I have and knows his stuff, and one is never too old to learn new things. The bay was dead flat with a strong incoming tide. It did not take long to realize why Bill had left..." no see ums". I was getting eaten alive with nary a swirl to show for it. Luckily, my buddy John showed up with bug spray and I was able to settle in. Just as the sun was setting, I had a nice swirl. Continued to toss to the exact same spot and on the 6th cast had a nice blow up that missed. After a dozen or so casts to same spot, I figured it was time to bring out the big guns and tied on the big Chugger. On the 2nd cast the fish finally blew up with some purpose and I boated a nice 25. The bigger fish tend to stay in the same spot, so you have to be patient and keep trying different things to entice the fish.
Posted by Rick Weaver at 8/30/2010 09:01:00 PM No comments: 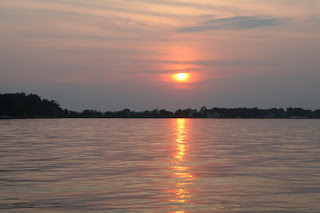 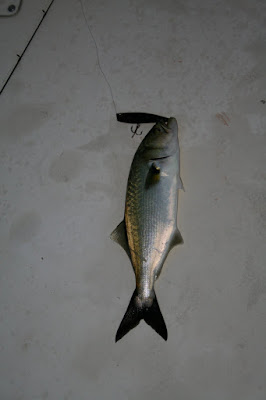 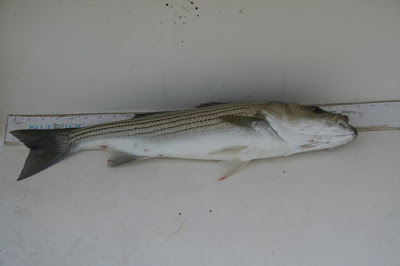 Left the dock at 6.30 to bathtub like conditions with the expectation that the bay would be chop city like most of the summer. When I arrived at the shoal, conditions where near perfect. The water was like glass, but the tide was barely moving at all. After anchoring, the boat was literally pointing east. Tossed plugs for over an hour with not even a swirl. Finally at around 8 I had a huge blowup just 4 feet from the stern. Tossed back about 8 feet and as the plug approached the same spot there was a huge boil, but the fish never came to the surface. The third try was the charm as a very fat 24 slammed right before my eyes and immediately went airborne. Not much happened until the sun set when huge bait pods started moving my way. They were obviously being slashed by fish from below. The sound was incredible as they surrounded the boat. Just as it was getting dark, I found out what was below...dang Blues. Good fight, but what a mess they make.
Posted by Rick Weaver at 8/17/2010 09:10:00 PM No comments: 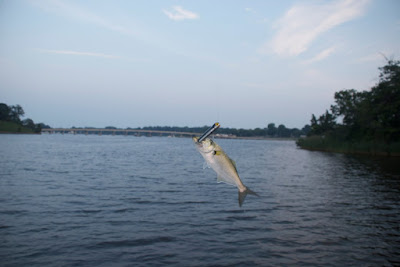 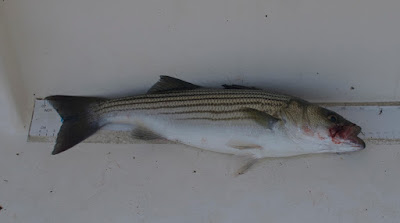 A brisk wind continued from the south against the outgoing tide, so I decided to stay close to home. Started off at the inside bank of the Broad creek bank and immediately picked up a "too close to call" Striper on the yellow twisty. Tried topwater for my second drift with no takers. Moved across the river to "Mitch's Spot" and again picked up a 17 7/8 inch on the yellow twisty. Tied on the smaller chug bug and messed around the area for 15 minutes or so before moving back across the river to the "Rock Jetty". Thought for sure there would be some Topwater action here, but no luck. Moved over to the broad creek side of the point and did a slow drift with the wind. About half the way down, I had a baby slam and had my first pesky bluefish of the year. That spells the end of the twisty's and the start of 100% TW. Peaceful night.
Posted by Rick Weaver at 8/09/2010 08:51:00 PM No comments: 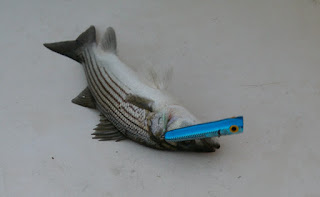 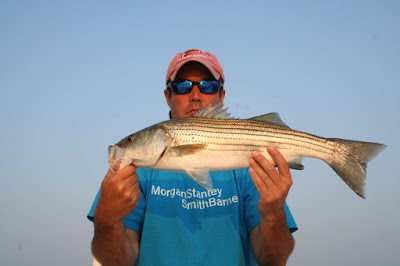 I hopped on the boat around 6.45 and headed for Thomas Point. The humidity of July had finally moved out and the temp was just perfect. We have had a lot of rain the past few days and I noticed that the water temp had dropped to around 83. The tide was very low when I left the dock and appeared to still be falling. Anchored up at my spot and started with the big Chugger. Had a nice blow up on the 2nd cast, but it missed. After 10 casts or so, I switched over to the yellow twisty from weds. On my first cast I hooked a very nice fish that had the drag screaming. A great fight followed, with the fish coming to the surface several times. Turned out to be a nice 24. Picked up several more 16's on the twisty and played around with several different plugs for the next half hour. As the sun was setting, I finally had a blowup and boated a 18 on the big Chugger. Topwater is finally picking up. Had 2 spectacular blowups as it was getting dark. Both hit close to the boat and put on quite a show before throwing the plug. Great night.
Posted by Rick Weaver at 8/06/2010 10:05:00 PM No comments: 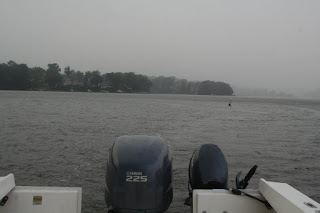 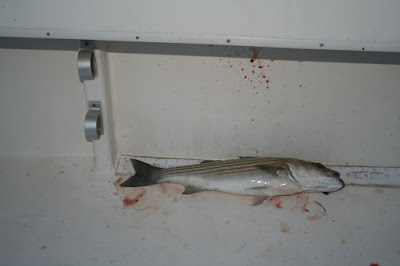 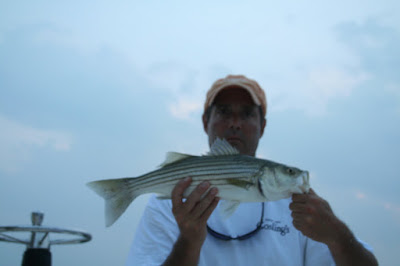 Left the dock around 6:30 and ran directly into a terrible thunderstorm. Hid under the Riva Rd bridge until the storm passed and then tentatively made my way out to Thomas Point Shoal. The tide was coming in and wind was ripping. Could see the Annapolis Weds night races on the horizon and they were clearly heading in early. Waves were a good 3 feet when I anchored up. I knew it was crazy, but I had a feeling things would settle down...they never did. Tried topwater, but it was just too rough. I switched over to a 3 inch yellow twisty and immediately started picking up 14-16 inch dinks. After 10 or so, I finally landed a barely legal 18 (picture). Continued fishing until dark. Just as I was about to leave, a nice pod of fish boiled up right of the stern. My cast landed right in the middle and I immediately had a nice slam and the drag started screaming. Turned out to be a very nice fat 20 that bloodied my deck. After a 10 minute struggle to free the anchor, I headed in. Good night despite the lousy weather.
Posted by Rick Weaver at 8/04/2010 09:30:00 PM No comments: 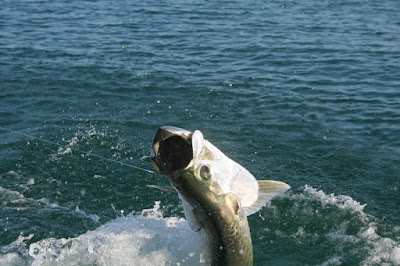 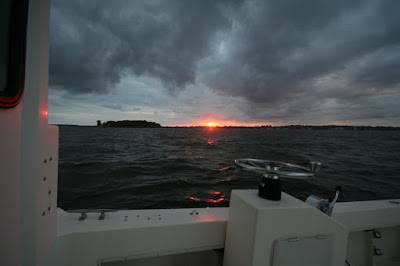 Been a long time since my last post. Fishing really turned lousy towards the end of May and stayed that way all through June. I caught a lot of dinks, but not one single 18 inch keeper fish. It was really frustrating, but I kept at it. Went on a great Tarpon trip to Boca Grande FL with college friends, but my home waters really let me down. Then a routine oil change turned into a 4 week "in the shop" nightmare. Got my boat back the day before leaving on a 10 day west coast road trip with my wife and daughter. The only positive was that I was able to have a new Lowrance HDS 10 installed. We returned late last night, so I was anxious to get out tonight. Unfortunately the skies looked ominous and I almost stayed home. Did not see anything serious on radar, so I headed to Thomas Point shoal and anchored up. Tried topwater for 10 minutes or so, but it was just too rough. I switched over to my last 3 inch twisty. I immediately picked up a barely legal 18 that actually took a good bit of drag as I reeled against a windblown incoming tide. Picked up another dozen or so in the 16 inch class until the twisty was shredded. Tried the longer 5 inch twisty but could not even get a bump. Found one last yellowed 3 inch twisty at the bottom of my bag and switched over. I immediately picked up a nice 20. I don't think the bigger twisty has the right action for 4 feet of water and it never seems to work. Let's hope August will be better than the first half of summer.
Posted by Rick Weaver at 8/02/2010 09:38:00 PM No comments: