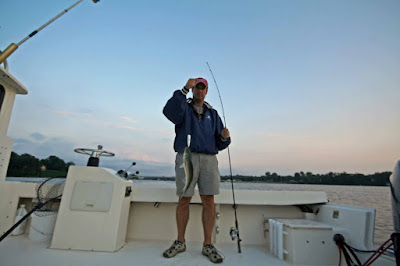 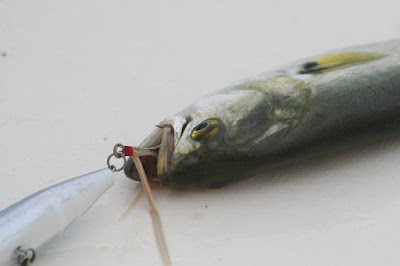 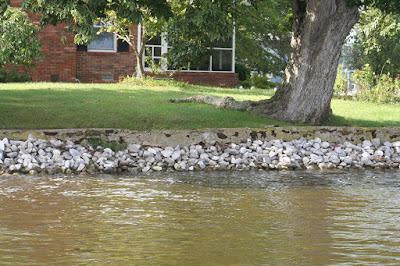 Has been very good for blues the past month or so, but keeper sized Rock on plugs has been very tough. I had my first decent blow up on Sat near the first pier upriver of Broad creek. Today it was raining off and on from 2-3 PM. Picked up a nice blue Topwater trolling over the point. Around 3 the sun came out, so a I made my way downriver from Riva Rd bridge. I always hit the large Oak tree at the point downriver from Mike's. A fishing buddy has caught several there over the years, but I had never had any action. The tide was moving out and wind was pushing water into bank. On my third cast, I had a nice blow up that appeared to be a striper. Had the same fish blow-up for the next 3 drifts. Decided to anchor off the spot and nail the sucker. Finally after a few casts the fish slammed hard and the fight was on. A very fat healthy 22 incher. FINALLY. Hope this is the start of fall river run. The river was eerily calm when the fish hit. The sound was incredible and had my heart pumping.
Posted by Rick Weaver at 9/28/2008 09:07:00 PM No comments: 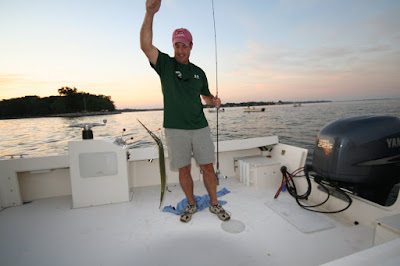 Have been hitting the Thomas Point Shoal most nights for the past few weeks. Stripers' have been few and far between, but the topwater action for Blues has been incredible. Tonight it was non-stop action right off the point. As the night was winding down, I has a strange fish hit my plug and immediately go skyward. It was a good distance away so I did not know what to make of it, but clearly it was not of this world. The way it came out of the water reminded me a of a skinny swordfish. As the fish got closer to the boat I thought it was just a foul hooked blue, but when she came over the gunwale, I had my first "?". One of the boats nearby saw the whole thing and gestured "what was that". He came over to take a look and said it was a needle fish...the biggest he had ever seen. Wow..one cool looking fish...with some nasty teeth. So now I have a new topwater hitting species to target.
Posted by Rick Weaver at 9/17/2008 09:45:00 PM No comments: