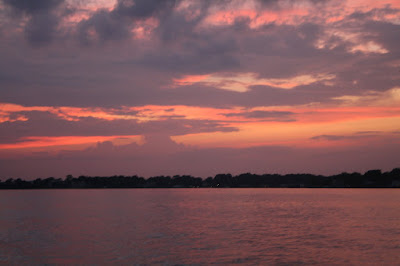 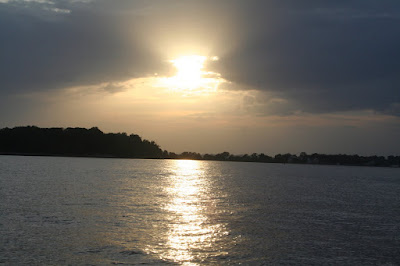 The only girl I have ever know named Irene was a rather annoying girl from high school who always looked like she needed a shave. So, with hurricane Irene threatening to shut down fishing for a least a week, I was intent on making my last night a good one. As I strolled down the pier at 7 pm, it looked like mother nature had it in for me. The western sky looked dark, but the almost complete lack of wind gave me hope. I have been fishing the South River every day for 12 years now and can say without a doubt that the last week of August is my favorite. The weather has always been perfect and marks the start of fall topwater bite So I decided to make a run for it. It was great to see the sun burst through the clouds just as I arrived at the shoal. There was a very strong outgoing tide, but the water was like glass. I anchored up around 7:30. I worked everything in my arsenal with only a few dinks to show for my effort. Just as the sun set the water about 200 yards from me exploded with feeding Stripers. Just as quickly as the appeared they went down as some yahoo out of fishing creek nearly clipped my anchor line on his way to the lighthouse. It took another 5 minutes before they resurfaced in basically the same spot. I quickly pulled anchor and moved uptide of the pod. My first cast was met with a huge blowup that was on then quickly off. The next 4 casts were exactly like the first. Finally on my fifth cast I brought to the side of the boat what appeared to be a 24 class fish, but as I grabbed the leader and attempted to swing her onboard the hook popped out. The next cast was surreal. I made a short cast and as the plug hit the water multiple fish slammed at once with no clear winner. This battle continued for several more rounds before I finally hooked up. As as started to reel, the line snapped as my 20 lb flourocarbon leader was shredded by the other fish banging up against it. I cannot remember ever breaking a leader while Striper fishing. It reminded me of tarpon fishing. The next cast resulted in another massive battle for the plug that resulted in a hookup that threw the plug past my head and into the pilot house where it snagged my sweatshirt hanging on the seat. Ok..now I am pissed. I want at least one picture tonight. I stayed on the fish for the next 15 to 20 minutes with every cast resulting in multiple blowups. I just could not get one to stay on the hook. Oh well, it was a perfect night. Too bad the rest of the week will suck.
Posted by Rick Weaver at 8/26/2011 09:42:00 PM 2 comments: