Somewhere over the rainbow.

Light tackle fishing has been difficult this entire year. If it has been windy, or thunderstorms were on the horizon nearly every night. Last nights storm was one of the worst I have seen in my 50 years living in MD. The sky was black as coal. The winds went from 5 knots to 70 knots in a matter of seconds and Papa Dog sized hail rained down seconds later. Then, just like that, it was over. The sun popped out and a beautiful rainbow appeared over the bay and at the end of that rainbow was my pot of gold. 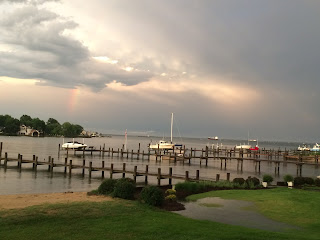 I used my pot of gold to buy the perfect topwater night. I met Carter at the new house at 6 pm. It was the first time that he had seen the "new,16 year old, boat". I could tell from his reaction, that the decision to stick with Mama Dog rather than buying a new boat, was the right one.. It was still a bit breezy, but the horrendous humidity was finally gone. After a short jaunt out to one of the freighters to toss plugs up against the hull, we ended up at "the spot" around 7. Even though it was low tide was 5:30 the outgoing tide was still ripping. It was flat enough to work topwater but not ideal. Carter was tossing plastic while I, of course, was working Papa Dog. Around 7:15 I had a huge blowup and it was on. After several  drag screaming runs my line snapped. If I had to guess, I would sat it was a 26 or 28. All I know is that it was the best fish I have had in quite some time. A few tosses later, in the same spot, I picked up a nice 22. This was followed by a double as we both boated 18's. We continued  to work that spot for the next hour with non stop action. The biggest was a 24, which for the shoal in June is quite a feat. It was a great and welcome night after the crap mother nature has thrown at us the past month or so. 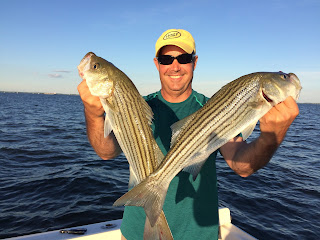