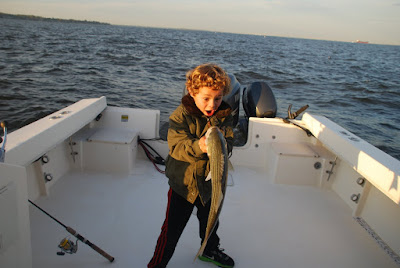 My partners tonight were an old friend Larry and his kindergarden age son Lawrence. I met them at the dock at 5 sharp. Little Lawrence was excited but very apprehensive when he learned that his 2 foot rod, complete with some cartoon character, was to remain at the dock. The week before, I had met Lawrence at the marina and taken him through the basics of spin casting. So, tonight he was to use the "big boy' rod. We started with a little pre game warmup. I was proud to see him grab the pole, pull the line tight to the reel with his finger, flip the bail, and whip off a very respectful 30 foot cast. OK, now I am apprehensive. The thought of a set of very sharp treble hooks traveling at a high speed was disturbing. He was going to need a large berth!

It was dead calm with a slight breeze and incoming tide as we set off. My plan was to make a quick run to the Thomas Point shoal and pray that it would be nice and flat. After stopping briefly at the western shore of Glebe Bay, we anchored at "The Spot". It was very choppy with a ton of boat traffic...not good. It did not take us long to figure out that the best approach was for Larry to stand in doorway of the pilothouse while I kept watch from the safety of the walkway to the bow. In between casts, I was able to hop down and make my cast. On my third cast I had a nice blowup and handed the rod to Lawrence. He did a great job and soon had the fish at the side of boat and I swung him aboard. I showed Lawrence how to grab the bottom of the fish's mouth with his thumbs and lift him up for a picture. I knew as soon the shutter closed that a "topwater man" had been born. Since it was so rough, Lawrence had not really experienced the full impact of the 22 inch Rock blowing up on the plug, so I pulled anchor and headed back to Glebe bay to catch the last half hour of light. Unfortunately, with the boat traffic, we were never able to find some clear stillwater.
Great night with a great kid.
Posted by Rick Weaver at 10/24/2010 07:43:00 PM No comments: