Last Monday was the best day I had. Caught a real nice 27 at the shoal. On Tuesday a woman from work joined me and we had a blast. She had been asking me for quite sometime to go fishing. Since topwater fishing involves numerous sets of treble hooks, I am always leery of taking someone whose skill-set I am unfamiliar with,for safety reasons. I asked her how her casting was and she said it was ok. Well it turned out, she was better than ok. She cooly tossed her first Popa Dog a nice 30 yards or so with a nice fluid motion. She had never caught a striper and I am not sure she had even been on a boat before. So I had a huge smile on my face to match hers when she got her first blow-up and boated a nice 18. Her total for the night was 6 with one keeper that she took home to her family to show off her mad skills. One of the more satisfying nights of the year. The rest of the week was spent at the shoal as my "Dora the Explorer" approach had yielded little more than kidney damage from the chop I endured looking around. So it has been "the spot" for me. Seem to be settling into a normal summer pattern of 18-22 inch fish. I boated two 20's and a 16 in an hour tonight. Not the action from a few weeks ago, but a great night non the less. 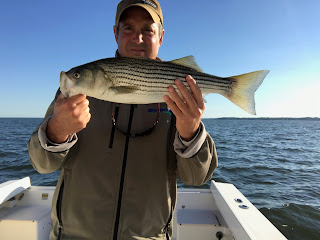 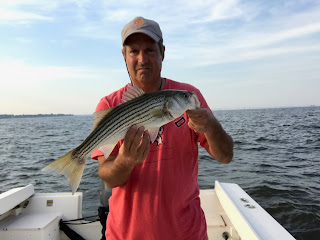