Banging head against the wall 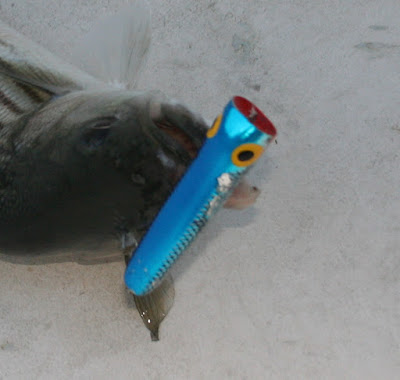 Friday night I headed to TP despite severe thunderstorm warnings. The skies seemed sunny and the breeze had laid down nicely. The only thing that was working was the twisty and the fish were all dinks, but I continued plugging away hoping for the elusive topwater slam. My mission was interrupted by a phone call from a buddy who lives on Thomas Point and could see me from his back deck. He said that there were tornado warnings coming right at us from the west. NOT GOOD. So I raced home and got in my car just as the rain came down hard.
Did not fish saturday, but was out at 9.30 Sunday AM. It was quite breezy, so I fished marker 16. The only thing working was again the white twisty. I must have picked up 20 fish between 16-20 but no TW action. Tonight the wind had laid down so off to the point I went. Arrived at the spot and anchored up at 6.45. Fished until dark. I alternated between the black stillwater, white twisty, and the big chugger. Got a fish on virtually every cast with the twisty and one very nice 22. Just as the sun was setting, I finally got the slam I was looking for and boated a fat and healthy 20 on the big Chug Bug.
Posted by Rick Weaver at 5/16/2010 09:47:00 PM 1 comment: 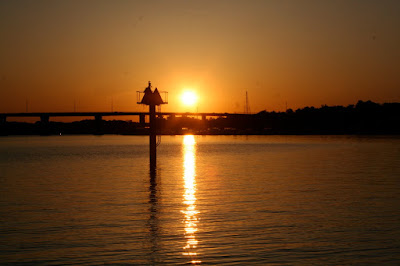 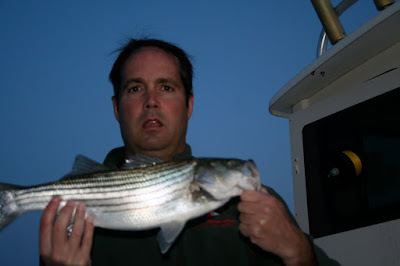 Traveled to Charleston SC for my daughters graduation over the past 4 days, so I have not fished since last post. My fishing buds tell me it has been blowing 30 knots the entire time I was gone. Jumped on boat at 6:30. The wind had really blown a lot of water out of the river and the tide was still going out. My gas gauge said empty, so I stayed close to home. Ended up at marker 16 and had steady action on a the white twisty. Picked up 5 around 16 inches until finally picking up a legal 19 as the sun was setting. Turned out to be a perfect night for TW, but no takers.
Posted by Rick Weaver at 5/10/2010 08:42:00 PM No comments: 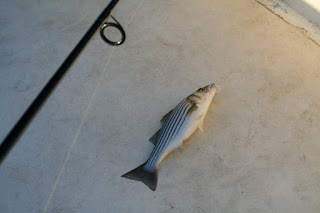 It was sunny, 85, and no wind all day. The water in front of my office was like a mirror all day, so I was anxious to get out there. Low tide was predicted for 6 PM, so timing seemed perfect. I arrived at Thomas Point at exactly 6 and found 20 knot winds and a 3 foot chop. In a nutshell, it was miserable. Tried both plastics and plugs, but the twisty was the only thing working. Action was steady, but they were all dinks. I stuck it out till sundown, but the winds never laid down. Final count was 7 between 14 and 18.
Posted by Rick Weaver at 5/05/2010 08:46:00 PM No comments: 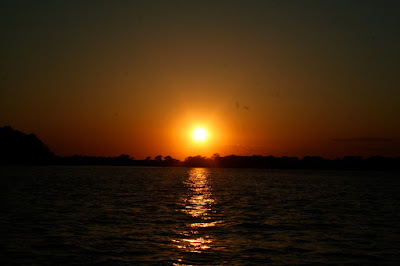 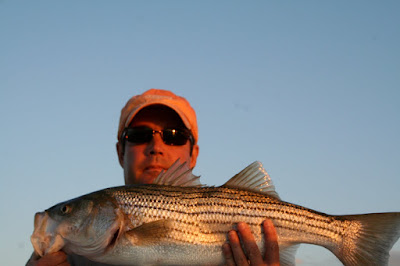 Once again a stiff easterly breeze nearly kept me home, but decided around 6:30 to head out. The breeze was a nice warm breeze without the humidity of the past few nights and a bright blue sky. Arrived at TP around 7 and anchored up. Same conditions as the other night with John...Tide coming in and a stiff easterly breeze pushed the boat to a 90 degree angle to tide. Started with the Black Stillwater and shortly boated a 17. The only option was to toss straight out the back of the boat with the wind. Switched to twisty and picked up another shorty. Fan casted both the med and med-light rods with stillwater twice without a slam. Switched back to plastic and had on a nice size fish but lost her before getting a look. Finished the night fan casting both Stillwater rods 3 times...nada. Last fan I switched over to Bubba Chug. My first cast was into the wind off the bow. As Bubba was coming down the face of wave I had a huge slam and thought it might be a 28 inch class fish. Gave a great fight but turned out to be a hefty 5 year old 24.
Posted by Rick Weaver at 5/04/2010 08:29:00 PM No comments: 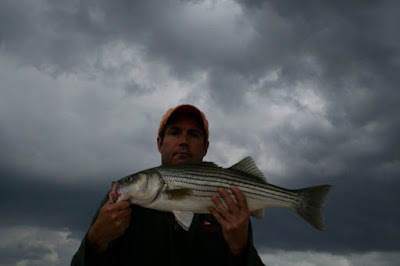 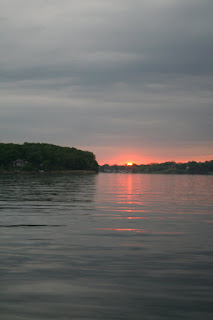 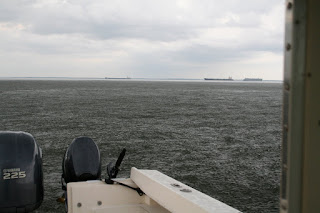 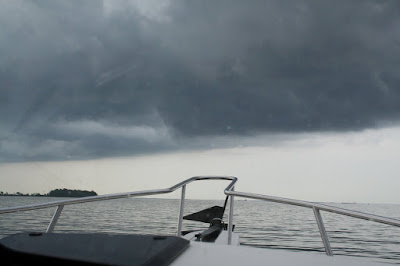 A series of things kept me from fish Fri, Sat, and Sun., so I was anxious to get out there tonight. Unfortunately the weather was calling for scattered thunderstorms. I jumped on the boat around 6 PM and planned on fishing Lake Riva. Not much was happening, so I decided to make a run for it. As I approached the bay, the water was completely flat, but a huge black cloud was hanging over the shoal. Just sort of drifted around for about 15 minutes and finally picked up a small 16 on a white twisty. Just as I tossed her back in the rain came. It was hot, muggy, and very buggy. Felt like a August night. After waiting out a short rain burst, I switched over to my black Stillwater. It was not long before I had a huge blow up. This fish hit only 10 feet from the boat so I was treated to a wonderful dance up close. A nice 24. Picked up and headed in to calm waters and a very nice sunset.
Posted by Rick Weaver at 5/03/2010 08:40:00 PM No comments: