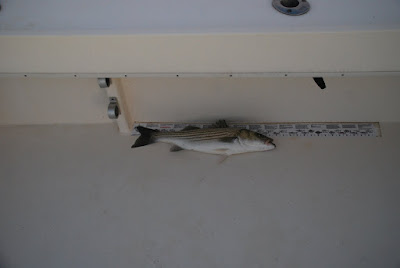 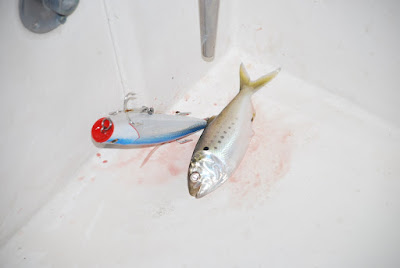 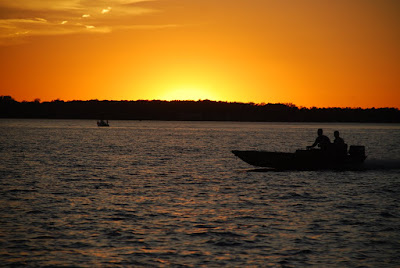 You could not ask for a better October night. It was 80 degrees, bright blue ski, light NW wind and dead low tide when I left the dock at four tonight. It did not take long to realize that the river was just not fishable, due to the leaves on water. So after a few stops, I arrived at the Thomas Point Shoal at around five. Just as I arrived , Dabs pulled up with a buddy. It did not seem like the fish were there, so Dabs went off to chase some birds. I decided to anchor on my spot. The tide was just beginning to come in and the wind was a bit more brisk than the river, which made for a strange boat position. For the next solid hour, I plugged away with nothing but a cramped back to show for it. Dabs returned with the same results and anchored up close by. My buddy "Wild Bill" showed up and anchored on the mark. One of the guys on his boat immediately boated a 19 using a plastic storm shad. It was nice to know that the fish were there, but disgusted that a "non topwater" guy was the one to show me. Soon after I had my first blow up that missed. This was followed by eleven straight blowups that missed. Needless to say, I was quite frustrated. I had been using my rod with an old black Stillwater with rather dull treble hooks. I finally switched to my rod with a brand spanking new white Stillwater. On the next blowup the line finally came tight and I boated a very nice 22. Just as I went to make my next cast something caught my eye. I had read in nearly every "Striper Book" about their feeding blitzes, but had never witnessed one. The water on both sides of the boat exploded with baitfish jumping in every direction. This was followed by what can only be described as hundreds of simultaneous blowups. There were BIG fish jumping and slamming baitfish everywhere. The "plastic guy" from Bills boat came tight and was immediately broken off. I grabbed my big daddy rod with the Stillwater Sr. tied on. I was able to make a good 25 casts before it calmed down. Unfortunately the only thing I boated was a baitfish that was snagged in the mayhem. Needless to say, I was quite frustrated. Great night despite the one fish result.
Posted by Rick Weaver at 10/28/2010 08:05:00 PM No comments: