Got to love Google

After checking the internet for "prop not catching at high RPM's", I concluded that my prop needed replacing. Luckily I had a spare prop on board, so James agreed to meet me at the boat at 4:30 to attempt an "in water" prop swap. I told my wife we would be back in 15 minutes and was met with a high degree of skepticism. I think we surprised ourselves when 15 minutes later we had replaced the prop and took a quick test drive to confirm the diagnosis. So the dark cloud lifted and we were good to go.

James and Carter met me back at the boat at 6:45 and we headed out into a mirror image of last night. Again the wind was howling and last nights rolling waves had been replaced with a 4 foot chop. On my second cast a huge wake appeared behind my plug and we all watched one of the best blow-ups of the year by a nice 24 incher.  I quickly followed with a 22 and a 20. At this point the boys were getting a bit antsy. The bite shut down for the next half our or so until James finally netted a nice 22. Not to be left out, Carter finished the night with back to back 20's on my old go-to plug a white Stillwater. So 6 keepers in horrific conditions made for a fairly decent night.

My buddy James is in town from CA, and we were both anxious to hit the point for some serious plugage. Unfortunately, James always seems to bring bad weather with him. The skies to the South were filled with ominous black clouds, when we left the marina at 7 PM. I had a very bad feeling which only intensified as we approached the bay. The wind was howling against the outgoing tide and you could feel a storm approaching. The chop was just too much, so we bailed out and headed for Aberdeen Creek to get out of the wind. After several drifts along the shoreline, with zero action, I made an executive decision and headed out to the shoal. James is my original topwater buddy and I was determined to show him how good things have been this summer. We finally anchored up at the rock pile at 8 PM. Conditions were horrible, but workable, so I grabbed Popa Dogg and went to work. On my second cast, I had a nice blowup and boated a healthy fat 22. Not to be left out, James grabbed my other rod with a Popa Dogg and hit the same spot....BAM. We both knew instantly it was a big fish. With the wind and full moon tide, the drag was singing. I have fished with James more than any of my buddies, and I can honestly say this was the best fight any fish has ever given him. It turned out to only be a 26, but in those conditions it might as well have been a 36. The wind was now howling and the clouds getting closer, so we headed in. We were having a good old time on the ride in when all of a sudden my engine started to wizz and it was clear that something big was wrong. I was able to move, but could not push her beyond 500 RPM's. So when we finally pulled into the slip I felt a huge Dark Cloud over my head with the knowledge that I will probably be out of action for a while. 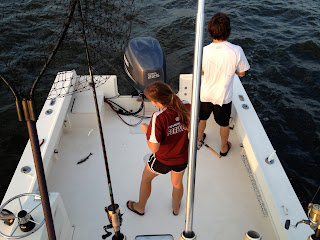 I awoke before sunrise this AM, and decided to change things up a bit. The water was like glass when I left the marina at 6 am sharp. I rarely fish the morning and am always amazed how beautiful it can be. When I arrived at the shoal, there were birds everywhere and dinks slamming baitfish on the surface. I almost moved to avoid having to remove the big treble hooks from their tiny mouths. Luckily I stayed, because shortly thereafter all hell broke loose. The tide was going out and the outline of the rock pile was clearly visible on the surface, so was able to cast right into the rip. Nearly every cast resulted in a spectacular blow up and some incredible fights on the surface. My biggest was only a 26, but I also boated 6 24's, and way too many to count in the 22 inch class. Mild Bill was anchored a short distance away so I invited him to slide in and join the action. But, as is usually the case, the bite immeditely stopped. The highlight of the morning though, came just as I was about to head in. I picked up a small 18-ish fish and when she got within a few feet of the boat another fish, in the 24 inch class, slammed the plug hanging from her lip. For quite some time I had both fish on my line as the literally wrestled for the prize. I could not believe my eyes as the rolled over and over throwing up a huge splash and making more noise than a thrashing Tarpon. Looks like I may try mornings for a while. Great way to start a lazy summer day.
Posted by Rick Weaver at 7/28/2012 09:55:00 AM 1 comment:

I had along my man Carter and his dad Doug this evening. We left the marina at 7 pm to nary a swirl of breeze. Unfortunately, when we arrived at the point the wind was howling and we faced a good 3 to 4 foot chop. Wild Bill and Chris had already thrown in the towel just as we anchored up. We had to move several times to get near the rock pile, but finally settled in and went to work. I as usual worked the Dogg while the two of them worked white twisty's. They caught a ton of dinks, but tonight topwater clearly won out as I was able to manage a very nice 20 and a 19. Not your ideal conditions, but good company and not a bad night of fishing.

I checked the tide when leaving the marina at 7 tonight. I thought for sure that high tide was expected at 7:20. So when I arrived at the shoal and saw the big ships sitting halfway into a swing around, I assumed the tide had started to come in and positioned the boat accordingly. It took about 15 minuted to realize that the tide had just begun to go out. So I repositioned the boat on the other side of the rock pile and went to work. The next half hour was fantastic. I boated two 22's, one 20,  four 18's, and a bunch of under's. By this time the tide was ripping. I rechecked the tide table and boy was I wrong. High tide was actually 4:20. The action continued at a fairly steady pace for the next half hour, but there were too many dinks, so I headed in. I actually hit bottom for the first time in many years which reinforced how wrong I had been about the tide.

I had just returned home Friday night from the O's game in the best mood. I had taken Grace and her friend Kara and they had made it onto the big scoreboard. This was a first for them (as well as me) so they were obviously excited, especially after receiving several texts from young men in the crowd who had recognized them. Little did I know how much life would change in the next 15 minutes, as a massive wind storm tore through the area. What followed was 4 days without power during one of the hottest stretches to hit Annapolis in years. I rarely, if ever, fish on a Saturday, but just had to get out of the heat, so I headed out to the point. It was a great relief and a ton of fun as 16-20 inch fish slammed my plug nearly every cast. It did not dawn on me until the way in that there had not been a single boat in sight all night. Then it hit me...LIFTS, nobody could get their boat out without power. Ahhh...I was finally vindicated for being apposed to lifts all these years. With still no power Sunday, I headed for the Jersey shore for a wonderful unplanned vacation with my wife.

With power restored, I headed out with Carter tonight at our normal 7pm time. It was 100 degrees when we left the dock and the air was just plain disgusting. When we arrived at the point I checked the tide tables which indicated a 7:40 high tide. The tide was coming in at a good pace, so I was unsure as to whether the tide had turned early or had yet to change. It turned out to be the latter I positioned the boat for an incoming tide and we went to work. As usual, Carter worked the white twisty and I my trusty Papa Dogg. Carter immediately picked up several nice 18-20 inch fish, while I had several blow ups that were on but slipped away. It was crazy good for the next half hour as we both boated numerous fish up to 22 inches. I told Carter that there had to be bigger fish lurking out there and launched one of my longest casts of the night. Just as the plug hit the water we watched a huge splash encase the plug. This was followed by a fierce run that took quite a bit of drag. After several more good runs I boated a very fat 24.  Carter wanted to take a fish home to his parents so we set her aside. On the next cast he picked up a very nice 22 which was followed by my second 24 of the night. Unfortunately this fish gave little fight and was covered by sores. It was sad to see the difference in weight between the 2 fish from the same year. The one positive, is that it has been my only sick fish to date. To the Northeast of us we watched a huge thunderstorm approaching as we enjoyed a great sunset as we headed in just to be safe.