This past week has been very pleasant from a air temp standpoint, but very difficult for fishing due to a relentless southernly wind and a low tide that made my normal river spots off limits. I have managed to boat one keeper sized fish every night, but a multiple fish night has been allusive. The fish are still in the shallows, but getting close, without hitting bottom or making a lot of noise has been difficult.

My wife and I recently purchased a new home closer to the bay. I am super excited to no longer have to deal with the speed zones at the Riva road and Route 2 bridges. We are knocking down the present cottage built in 1915 and building what we hope will be the family beach house for many years to come. Despite the fact that we won't be moving in for at least a year, I have tried most nights to boat my first fish in the water in front of the property. A week or so ago my friend John had a nice blow up that missed literally 20 yards from my new pier. Well tonight, I finally got that first fish when a beautiful 22 blew up in nearly the exact spot from a week ago. I cannot express how happy this makes me. 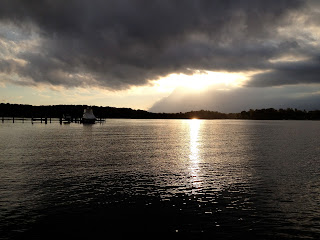 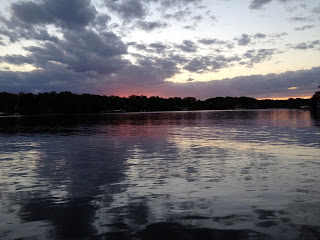 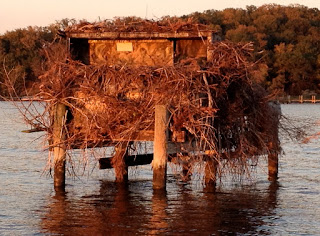 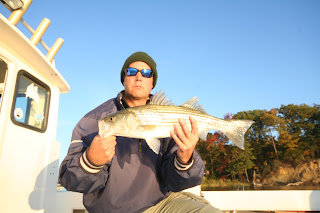 I have had a tough time recovering from the O's losing to the Yankees in the playoffs, thus the lack of posts. The weather has been crazy. The first half of last week was rainy and quite cold, so I was bundled up in my hunting gear. Then things warmed up and I fished in a light sweatshirt. I fished everyday and did fairly well. On Weds, I fished with John King and he picked up a really nice 23 on a Popa Dogg right up against the rocks at "the cove".

Yesterday was our annual community fishing tournament. As usual the weather was horrendous. Last year we faced 25 knot winds that made even the river un-fishable. When Carter and I arrived at the boat a little before 8, we found ice on the deck and a windshield that was so fogged up that we had to waste precious "low light" conditions wiping it down several times. To make things even worse, the tide was as low as I have seen it all year, due to a relentless wind from the west. Our plan was to hightail it to the Thomas Point Shoal and fish there until the sun got too high. On my way to the rock pile, I hit bottom several times. We tried anchoring several times, but with a stiff wind from the north and a tide that was still going out, things just did not feel right. My premonition held true as we were skunked for 2 hours as we waited for the tide to turn. Low tide was supposed to be 9:20, but when we pulled anchor at 11, the tide was still going out. We moved back into the river to fish our "go to" spots in Glebe bay. Again, our plan was foiled by the low tide, which prevented us from getting close to shore. After several engine gouging incidents, we headed back out to the bay to chase some birds. It seemed like every flock we passed had nothing but dinks under them, but I finally had a little baby blow up and boated a barely legal 18. At the point we said "this is crazy...everything we studied for was not on the test" and headed in. Our barely legal 1 pound 2 ounce beauty turned out to be the only fish boated by the fleet the entire day and we won the tounament. Now that is pathetic.


After a nerve racking Ravens win over Dallas, a game they should have lost, I headed out to Glebe bay to see if things had improved from yesterday. Again, a test that I was unprepared for. The tide was as high as I have seen it all year, and again, none of my practice prepared me for the shifty wind and a tide with zero movement. I made one long drift along the western shore with the wind, but had nothing to show for it. I moved across the river to Aberdeen creek, which I figured would be protected from the wind. Again, I was wrong. It was literally impossible to find fishable stillwater. Finally on the western shore, I had a low up from what appeared to be a good sized fish, but he missed. On his second slam, he knocked my plug in the air and tangled the leader around the front treble. Normally when this happens, all you can do is reel in fast and hit the same spot on the next cast. As I was reeling in the fish slammed the plug underwater and came tight. That was a first. After a very good fight, I boated a very fat 24. NICE

I headed out last night at 4:30 with Carter and his brother Garrett, with a plan to fish the river. We headed straight to Glebe bay, but found several boats in my normal spots. So we basically ended up playing mop up. Although it was a very frustrating night of fishing, I did manage a 22 to go along with Carter's 19.  At least the Mclendon family had a nice fish dinner.

Carter and I left even earlier tonight at 3:30. The plan was to get gas and then pick up my buddy Brandon at his place on Crab Creek. Brandon was delayed, so we poked around just inside the cut. There was a ton of baitfish, but it seemed like nothing but dinks underneath. I finally had a huge blow-up that missed (twice). That was basically it until the sun was setting and Carter picked up a 19 at the headwaters of Aberdeen creek. Great weather and company, but two difficult days of fishing.

I have had the pleasure of fishing with some old and some new fishing buddies since my last post:

FRIDAY- FIshed with Brandon and John King. We tried the shoal for quite some time, but it was crowded and not much happening. We moved into the river and Brandon picked up two nice low 20's fish and saved the night.

SATURDAY- Fished from sunrise until 11AM with a new buddy, Capt. Karl, a charter captain and the owner of the Miss Gracie. It was breezy and a bit on the cold side. Our ride was Karl's Pango. It is a sweet ride and perfect for shallow water fishing. Unfortunately, we were only able to boat one 20 inch fish all morning. A lot of fun, but frustrating fishing.

SUNDAY- FIshed with Carter and his middle brother Garrett. The conditions were actually quite good, but we ended our short 1 1/2 hour outing with nary a swirl from a keeper sized fish.

MONDAY- Fished by myself. I headed straight to the point and found quite a crowd. It was nearly impossible to find a good place to anchor, but I did manage one 20 incher.

Tonight I picked up Karl at 4:30 at his pier near the route 2 bridge. As we headed out to the shoal, the water was like glass. There was a light rain falling, but literally zero wind. Unfortunately, when we arrived at the point, conditions were a bit more snotty. The chop was 1 to 2 feet and the wind was blowing the opposite direction from the tide. I started the night with a hearty 20, that hit up tide from the boat. This was followed by a twenty five that produced one of the bigger splashes of the year. Karl then boated a low 20's fish before we finally relented and moved back into the river to enjoy a more peaceful fishing experience. At the cove, I boated our final keeper fish, another 25 that put on quite a show in 2 feet of water. We ended the night with a nice Bluefish and a nice blow up that missed on our last cast. Two 25's in the same night made me one happy camper.