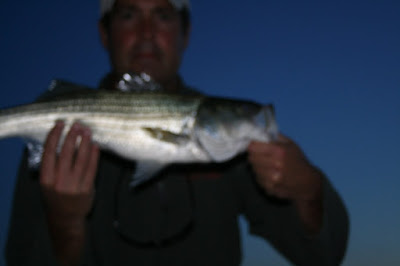 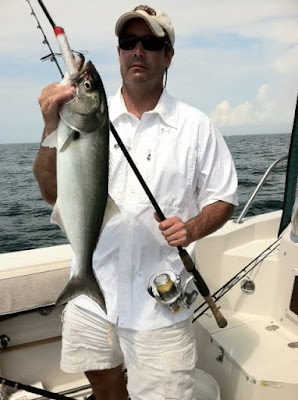 I have not posted much lately. It is not due to lack of fish, but as a result of dropping my camera on cracking the lens. The last two weeks have been very good. I have had the pleasure of introducing topwater fishing to several newbies with great success. My youngest daughter Grace and her boyfriend each boated several too close to call on Stillwater's . A good friend of hers, Carter and his buddy joined me last weds and we picked up 5 or 6 in the 20-24 range.

Tonight I left the dock at 6.45 to bright blue skies and a nice breeze. The air temp was in the high 70's and the tide was dead low. It was not until the sun set that the action began. The first fish hit on my last twitch at the boat and immediately went air borne. He literally came within inches of my nose and gave me a bigger scare than the 5.8 earthquake that shook my glass enclosed office at 1.45 this afternoon. I picked up 5 more keepers in the next 15 minutes. I also picked up a nice 4 pound bluefish that nearly spooled my med-lite St. Croix....the bluefish was actually caught on Sunday off of Cape Cod when my college buddies and I came upon Bluefish Blitz. I had read about them, but had never experienced one in person. All I can say is WOW. Every cast of our plugs was met with a massive slam of 4-6 pounders. We had a nice fish fry saturday night and I discovered that if you soak the meat in milk and then coat with old bay, they are actually quite good. The topwater season is in full swing now and my camera is back on board, so hopefully the blog will be a little more active.
Posted by Rick Weaver at 8/23/2011 09:07:00 PM 1 comment: