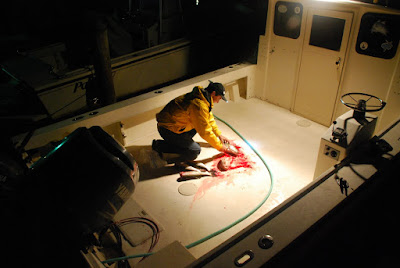 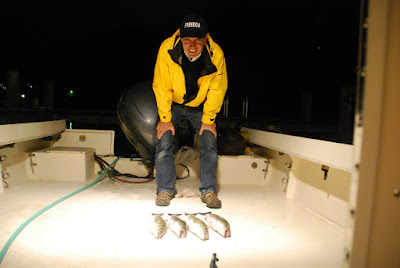 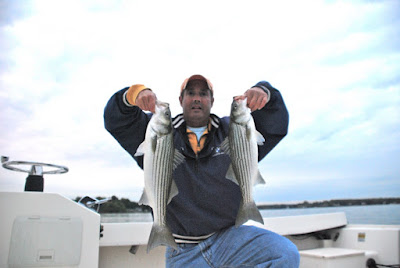 Yesterday was about a nice a day as you get in October. I fished from ten in the morning until the Ravens game started at 1. Worked my way out to the point with no action. Once I got there the breeze was stronger than I had expected, so I took a page from Friday night and drifted instead of anchoring. I was using the big sized Stillwater on my med-heavy St Croix. I rarely use this rod, but was hoping for one of the big boys. It did not take long for my plan to work, as I had a huge blow up and boated a fat healthy....18. Oh well, I was still happy to have picked up another fish on the drift. I have noticed on my last couple of trips to the shoal a large number of new boats crowding around "the spot". I am sure they are Tidalfish brethren who read my blog, so the company was welcome. I think they are to missing the point though. You can do well with topwater anywhere on the shoal, not just the particular rock pile that my lazy butt goes to every time out. It is a Shoal...not a Honey Hole. I need to say that 3 times before my next trip out. Headed back out after the game and was shut out. What is perplexing is why Sunday's have been so lousy and Monday's have been so damn good. My only theory is the lack of boat traffic on Monday

Met up with John, a old fishing buddy, who has not fished with me all year. We started off at "Al's Spot" and picked up 3 quick fish. John's Dad is a gourmet cook, and he wanted to keep a few fish, so into the box they went. Moved over to "the nest" and picked up another 2 fish. We then headed to the "brown house" where we gave up after 15 minutes. We continued our drift around the shoreline to the eastern shore of Glebe Bay. The two of us had slayed them there this time last year, so John took the reins and positioned us just as he remembered. Well he must have a good memory, because it was non stop action from the time we shut the engine off until dark 20 minutes later. We boated at least 6 and had many more blowups.
John cleaned the fish when we returned to the marina. I thought it was interesting that they had nothing in their stomachs. That explains why they were so aggressive.
Posted by Rick Weaver at 10/18/2010 07:42:00 PM 2 comments: