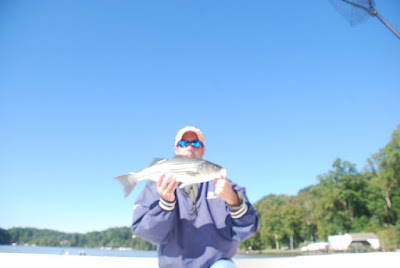 I normally avoid the weekends like the plague, due to the boat traffic. Since it has been raining non stop for 2 days, I needed to do a little fishing this morning. I left the marina around 10:30 to a stiff breeze from the north. I of course stopped at "Al's Spot" to start my morning off. I really did expect much, as the water was stained a chocolate milk brown. On my third cast I had a nice blow up and it was "fish on". I could tell it was a good sized fish for the river, but could not get a look at him due to the stained water. After a good 3 minute fight, I boated a football sized 22. Hit a number of Lake Riva spots with no success, before deciding to take a run out to the shoal. Made a good thousand casts over the next hour before giving up. Decided to try a bunch of new spots on my way in. Stuck primarily to the north shore to stay out of the wind. Again, I was looking for either living shorelines or sandy beaches. I didn't matter, as I had nary a swirl the rest of the day. It was nice to be out,but a bit of a disappointment as far as fishing went. I fished for a total of about 2 1/2 hours. Oh well.
Posted by Rick Weaver at 10/02/2010 04:43:00 PM No comments: