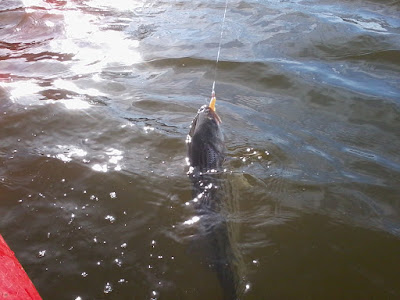 With cold weather predicted for this week, I figured it was ok to pull the boat. I guess that was a bad decision, as it seems that fall fishing in the river is just getting started. The temp was in the mid 60's when I dragged my cobweb infested kayak from the tall grass at our community Yak Rack. Since the water temp was still in the low 50's, I figured there might be a chance a catching a Striper, but assumed a Pickerel or White Perch was more likely. So, armed with a white twisty on a 1/8 ounce jighead, I launched at 12:30 into a light easterly breeze. I worked the north shore across from the marina as far east as " Al's Spot". It seemed like I spent the majority of the time untangling errant casts from various piers before finally getting into a good Yak groove. After 1 1/2 hours with no action, I moved back across the river. The first point on the south shore as you leave the Harbor Hills marina there is a community swimming area that is surrounded by netting. I have seen a guy anchored here many times and always wondered whether he was crabbing or fishing. I do not recall ever seeing a rod in his hand. There was a single gull sitting on the water about 10 yards from the point. I moved upwind of the Gull and slowly drifted while casting up against the netting. On my 3rd cast, I felt a nice bump and set the hook. At first I thought it might be a small perch and then the fish took off with me and the Yak in tow. I have never caught anything larger than a dink while Kayak fishing, so my heart was racing. When I got the fish next to the Yak, it appeared to be in the 22-24 inch class..Very Cool. I snapped a few pic's with my cell phone and off she went. By this time the wind had really picked up, so I made my way back to the boat launch. What a great outing.
Posted by Rick Weaver at 11/27/2011 04:13:00 PM