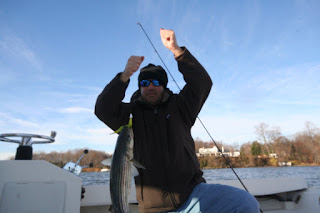 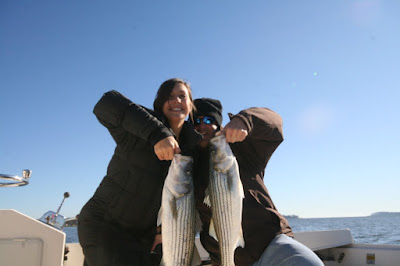 Anyone who has been out fishing consistently this fall knows just how difficult it has been. Back to back storms basically wiped out "Rocktober" and then a non stop southernly wind has made november even more difficult. I did manage to get out most days, but was forced to fish the side creeks out of the wind. I caught a few here and there, but for the first time since I began keeping records, I did not even manage a blow up during the entire two month stretch.
My middle daughter was home from college for the holiday, and so we headed out this AM to see if any birds might be working the mouth of the river. We marked a number of fish, but once again, It was a tad too breezy for topwater on the bay. On our way in, we stopped at marker 16 to make one final drift of the year. It seems like every year, I pick up a fish here late in the season. My daughter was using a BA on 3/4 ounce jighead and I dropped in a stingsilver. It was not long before I felt a nice tap and my drag began to sing. As I was fighting the fish, Liz screamed that she also had a fish on. I swung my fish aboard and grabbed her leader and boated the twin to my nice healthy 22 inch Thanksgiving present...nice. I may even try for a hour this afternoon. Taking the boat in Sat. for some much needed work, so this is most likely my last post of the year.
Went back out to marker 16 for a few hours this afternoon. There were marks everywhere. The fish seemed to be hugging the bottom, so I gave jigging a try again. I soon tired of the constant up and down motion, so I tried a different method. I would cast the BA out as far as possible, wait 5 seconds, and then begin a slow retrieve. This a least kept me interested. On my 4th try, I hooked up about 1/2 way back to the boat. After a very good fight on my heavy power rod, I landed a fat 26. The fish was very sickly, so I took a quick picture and back she went. Tried topwater the rest of the time with nary a swirl. Despite today's success, I just do not like jigging.
Posted by Rick Weaver at 11/25/2011 01:20:00 PM