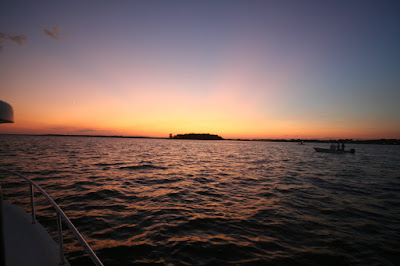 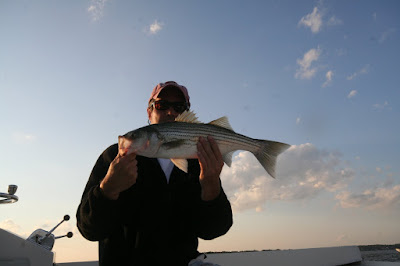 My post on August 27th 2008 was titled "Out Fished Again". I described how a dad and his 2 sons were slaying them right next to me while I was basically fish-less. When I arrived at the shoal tonight, Dabs was already anchored up with his brother aboard. They had just arrived and had boated one small 15. The tide was still coming in at rapid pace, despite what was already an abnormally high tide when I left the marina. It was quite choppy and breezy, so topwater was out. My white twisty on a 1/4 ounce jig head was basically working just below the surface due to the ripping tide, so I switched over to a 3/8 ounce and immediately picked up a nice 22. Little did I know that it would be my last fish of the night. Dabs and his bro were bailing low 20's fish a couple hundred feet away. Shortly after, a guy and his son arrived and anchored up on the other side of me. He immediately hooked into a fish and handed the rod to his young son. After a long fight, the kid boated the biggest fish I have seen on the shoal this year,a fat 31..NICE. Meanwhile dabs continued to bail fish one my right while the father & son team boated 6 footballs on my left. As for me...nada. I could analyze the situation for days to figure out the variables, but basically it just was not my night. It amazes me how a few hundred feet distance , 1/8 ounce of weight, or even a difference in color can make all the difference. That's what makes fishing so much fun for me. What was even more amazing was that the dad turned out to be the same guy from August 27th 2008. The same guy who identified and photographed my Needlefish catch the next night. What was even more amazing was that he and Dabs grew up in the same neighborhood and had not seen each other in years. I love everything about fishing. The smell, the sky, the laugh of young fisherman hooked into a 31, it's all wonderful. Great Night.
Posted by Rick Weaver at 9/29/2011 08:12:00 PM