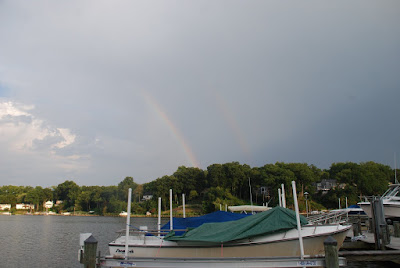 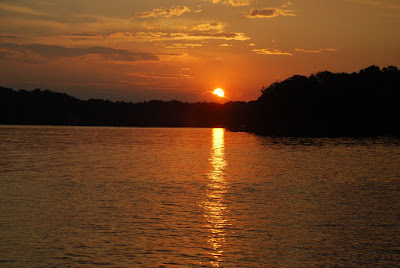 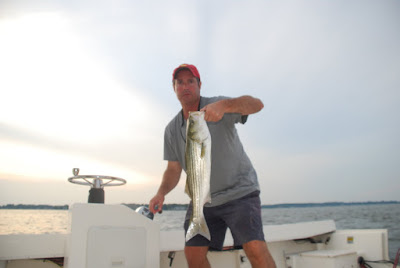 Last night was one of the nicest "topwater" nights of the year. I got a late start and did not get out the the shoal until a little before 8. There was a very strong incoming tide, but unlike the last week or so very little breeze stirring things up. The surface clearly showed where the rock piles where, so I anchored 20 yards off and worked the break. On my first several casts, I picked up little snapper blues on the small Chugbug. Every time I tried the twisty it came back tailless. The night before my friend Anthony had pulled up alongside and we talked about the state of fishing. He had been doing well on the eastern shore both trolling and LTJ with fish up into the 30's. When I mentioned the Blues problem, he gave me a few BA's with a new plastic that stretches so much that the blues can't rip them. As I worked this new plastic along the break-line, I had a nice hit a few feet from the boat. As I set the hook, the fish jumped straight up in the air like a largemouth bass and actually cleared the top of my engine. Very cool. It turned out to be a nice 24 that made my week. Thanks Anthony.
Posted by Rick Weaver at 8/03/2011 08:11:00 PM

Rick, glad it worked out for you. It was nice seeing you on the water at TP....I'll probably be out tonight. Those elastex baits or whatever they're called work great to keep bluefish bite offs to a minimum....obviously work well for rockfish too :)....give me a call (if you still have my number) or PM me on TF...lost my phone so I lost your #