Maybe its turning on? 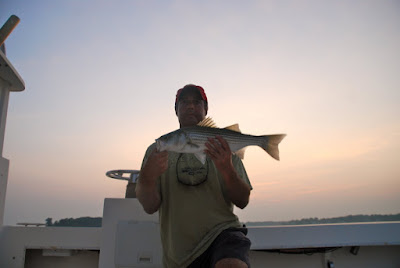 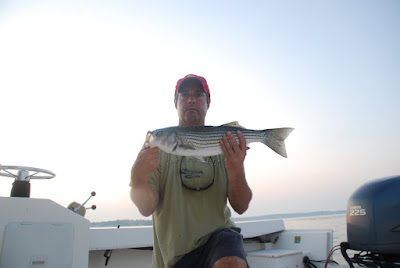 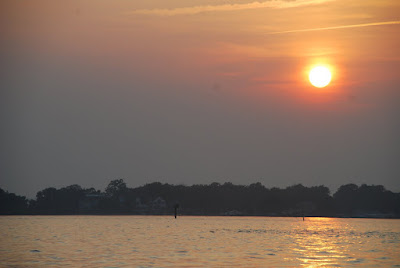 The last couple of nights have been brutal as far as conditions on the bay. The wind last night was blowing so hard that I literally could not keep my hat on.
Tonight I arrived at the lighthouse at 7.30 and found calm seas an a light breeze. Despite the days oppressive heat, it was actually quite pleasant. Worked the icebreaker for about a 1/2 hour with only one 18 inch bluefish. He made several spectacular jumps before breaking my leader at the boat. Headed to the shoal just as the sun was heading down. The white twisty produced a striper of some size or another on every cast. There was a strong incoming tide, so the best technique was to cast up current and let the plastic kind of float along with the current. My 6th fish was a very nice 22 that hit just as the bait was drifting behind the boat. Since the fish had to be pulled against the current and I was using my med-lite rod, it was quite a fight. After another 2o or so shorties, I boated another keeper size 20, pulled anchor and headed in. Nice night.
Posted by Rick Weaver at 7/20/2011 09:30:00 PM

Hi Rick
saw you out tonight just north of the riva bridge. I was fishing with my daughter in my 21 Mako. Are you having any luck in the river yet on top water? We got skunked the last couple of nights. Let me know if you are looking for a fishing partner one night.

Steve
443-995-9129 cell
I also have a parker just like yours and live four or five piers up from from gingerville creek.

That was only the second time I have fished upriver this month. I did pick up a decent 17 on a Chugbug the other night tight where you saw me. I got skunked tonight, but it was a nice night out with all the storms and such. I have been hitting TP every night which has hit or miss. Lots of sub-legals. The blues are in so I have solely fished plugs. Water is too warm. I will give you a call.