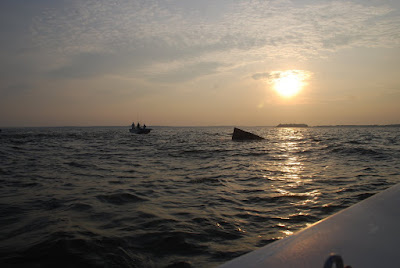 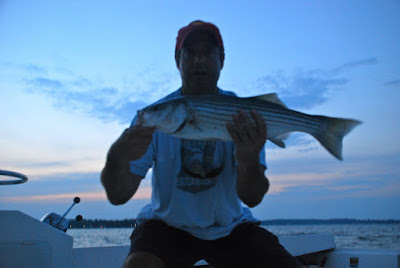 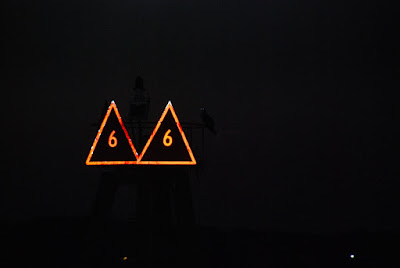 When I downloaded my pic's on Sunday, a number a very strange images appeared. The pictures before and after were normal lighting, yet the four images staring back at me were pitch black, except for a pair of triangular eyes with the number 6 as pupils. I was more than a bit unnerved trying to figure out how the hell they got there. My wife and 2 of my 3 daughters were equally perplexed. Oh well....I figured it would eventually come to me.
When I reached the confluence of the river and bay tonight, I noticed a DNR cop just sitting in his boat looking around. It seemed like a strange spot to be sitting, especially with almost a complete lack of boat traffic. As I continued on, it dawned on me that he was turning back smaller boats due to some incredibly big seas on the bay. I guess he figured my trusty Parker could handle it. My buddy John greeted me at the lighthouse with a hearty "can you believe this". I have seen the bay rough before, but nothing like what was slamming the rocks. The wind was blowing from the southeast and creating "ocean like" swells that I estimated to be about 5 or 6 feet. We worked the icebreaker for about a 1/2 hour with one other boat. I was completely drained and fish-less, so I headed to my spot around 8. By that time the bay had laid down to the point where it was fishable, so I anchored up. I spent most of the time working a plug, but did manage 10-15 small stripers on a white twisty. As I was making my 5th "last cast", I got a call from my buddy Dab's who had been watching the action from the comfort of his living room on Thomas Point. Since he had called just as I casted, I left my line in the water as we talked. When we ended the call, I said it was time to head in. Just as I brought the line tight, my pole bent and the drag began to scream. Since the tide was ripping, I had quite a time getting the fish to the boat, but finally landed a nice 22. Nice way to end the night.
As I motored home, I passed marker number 6., and it all came back to me. When I had passed the marker Sunday night, there were fireworks coming from the north shore. I figured it would be cool to capture the the show with the marker in the foreground. When I checked the pictures on my viewfinder, it appeared to be all black, so I adjusted my shutter speed and waited for another shot. The final shot came out normal, sans the fireworks. So my conclusion is that the number six eyes where actually my flash lighting up the reflective numbers on the marker, while everything else just came out black. Ahh..now I can sleep tonight.
Posted by Rick Weaver at 7/18/2011 09:29:00 PM