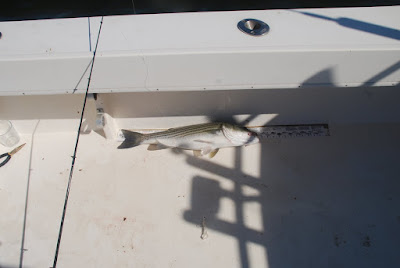 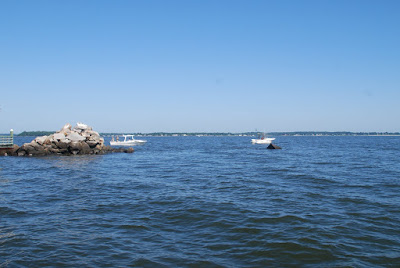 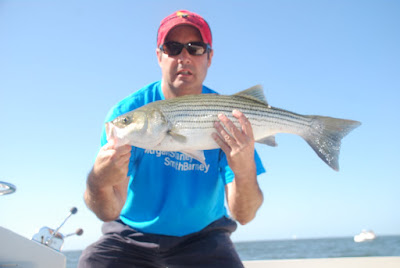 I have been debating continuing the blog this year. Fishing has been downright horrible and the weather has not cooperated since early spring, There have been many nights where the action has been non stop, but all of the fish have been "unders". I have even been getting the 16 inch class to hit on top, but it has been very frustrating due to the lack of real fish. Despite the lack of fish, I have made it out to the shoal most nights and have been rewarded with some incredible sunsets.
My buddy John has been telling me that he has picked up several keepers at the lighthouse, so Thursday night I gave it a go. The tide was going out, so I positioned the boat to fish the inside edge of the ice breaker. I was using a white twisty on a 3/8 ounce jig head. It was not long before I was rewarded with my first (believe it or not) keeper of the year...a nice 20. I headed back out to the lighthouse this morning and found a veritable parking lot of anchored boats that reminded me why I rarely fish there. I was able to jockey my way into the same position as Thursday and work both the inside and outside edge of the ice breaker. After several 17's, I had something sizable hit my twisty right up against the breaker as it jig was sinking, As I set the hook, it seemed like I might have been snagged. After a few seconds though, the drag began to scream. It took all my skills to land the fish. The tide was ripping, so I was drifting towards a anchored boat and the wind was blowing me towards the rocks. I was able to back the boat out of harms way while the fish made several runs. Once the fish surfaced, I knew it would require a net..a whole new problem. After straining to get the net down from the rocket launcher while avoiding another collision, I finally boated a "fall like" 24 incher...NICE. After a round of applause from several anchored boats, I hightailed out of there for the quiet of my "spot". Who knows, there may be a blog this year after all.
Posted by Rick Weaver at 7/16/2011 02:31:00 PM

Even thought the fishing may be "off"
likely due to the illegal poaching of the gill netters earlier in the season, you should keep it going. First, your Blog is well written; Second, you picts are excellent; finally, it helps to know about the health of the Bay. Keep 'er goin' R/csp

Nice fish! It looks like a fat fall football indeed. I'm glad that you are posting again.

This year has been mediocre for me and a lot of other folks as well. The salinity was way down until recently, and a sudden rise in the water temperatures in the spring may have kept a lot of the bait south (or so I've heard)


It is starting to heat up a little one the bay, and so let's hope for the best. Tight lines!

Thanks for the kind comments. I have and will continue to fish my 2 hours every night. I consider it my "gym" time and the lack of fish does not bother me a bit. I will continue to post nights where a least one keeper sized fish was landed.

What does R/csp stand for?