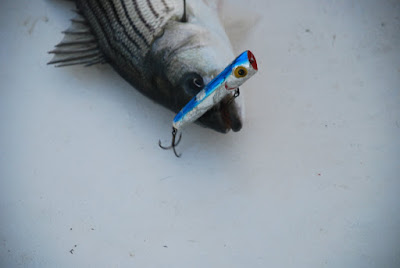 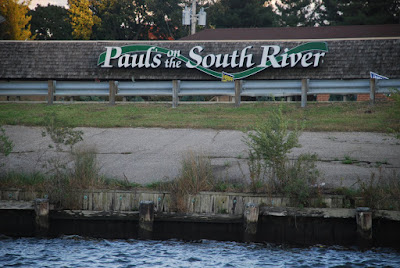 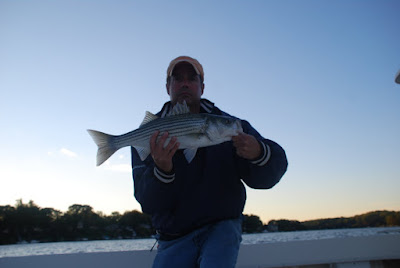 The strong wind and a commitment to take my daughter somewhere, was to keep me from fishing tonight. When she called and said she had a ride, I hopped on the boat for a quick jaunt around Lake Riva. The wind was blowing east and the tide was going out at a brisk pace as I made my first drift along the river side of the point. I was only able to make about 10 casts along the entire shoreline as my drift had me moving at a good 10 knots. I moved across the river to the "nest", which was a bit more protected. Made about 10 cast before the wind had pushed me past the last pier. One of the lessons I have learned over the years is that the wind can be your friend. I have had very good luck fishing coves where the wind and current is pushing the water up against some man made structure like a wood or stone bulkhead. As I surveyed the situation, it looked like everything was being pushed against the cement wall on the south shore of the Riva Bridge across from Pauls. I see a lot of shore fisherman casting from there and usually avoid it for several reasons. Foremost is that I have never had a blow up or observed anyone from shore landing a rockfish. I have seen many a catfish and perch caught, but never a rock. Last night James had good luck with the big Chugger, so I changed rods and abandoned my trusty Stillwater. On my third cast up against the wall, I had a nice blow up and boated a 22. Moved back out for a second drift and picked up another 22 at approximately the same spot. My third drift resulted in several blow ups that missed. At this point, I headed in, content to have landed 2 fish on a night that I was just happy to be out on the water.
Posted by Rick Weaver at 10/15/2010 07:00:00 PM