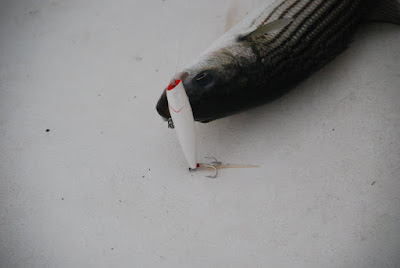 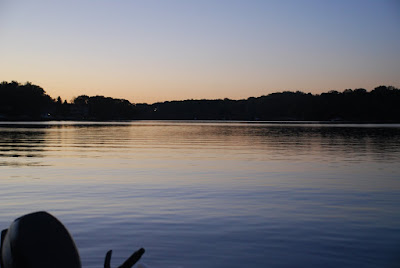 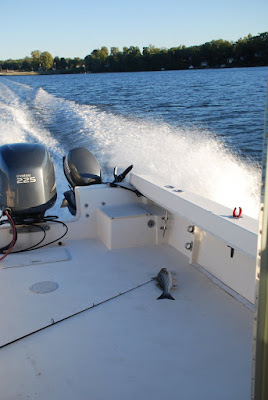 Today was our annual community fishing tournament,and for the 4th year in a row, the conditions nearly made fishing impossible. There was a steady 25 knot wind blowing straight out the river. There were actually white caps in front of my house near the headwaters. Fortunately, I did not wake up until an hour after registration and was, to my chagrin, sitting this year out. Most of the fleet of 5 to 10 boats are weekend warriors who's sole comfort zone is trolling the deep waters of the bay proper. Since the tournament is held in mid October each year, I have exclusively fished the river, and am always the only boat to do so. I knew the guys had to miserable, yet I kind of wanted to go fishing, but it just never looked like fun.

As five rolled around ,and the winds had died down a tad, I decided to fish the last hour of light. There were still a few guys from the tournament hanging around on a boat a few slips down. On my way out, I stopped to see how things had gone. The grand total of fish caught by the 5 boats was zero. The one guy described his trip across the bay to Poplar island at the crack of dawn when the winds were fairly light. They had trolled for 2 and a half hours with not even a knock down. As the winds picked up they decided to head west towards home. Two and a half hours later they arrived back home drenched and exhausted. As I started to head out one of the guys bet me a hundred dollars that I could not catch a keeper sized rock in the next hour. I thought of " Al's Spot" before telling him that I did not want to take his money, Headed straight to "Al's Spot" and immediately had what appeared to be a twenty at the side of the boat when I lost him. Damn, that would have been sweet to show up two minutes later to prove the "Trollers" wrong. Could not get the fish to resurface, so I headed to the seawall from last night. Had several quick blowups that missed, before finally boating a 20. Was it possible to run this fish back, show them that there are plenty of fish in the South River, and release the fish? I left the fish attached to the plug and hauled ass back to the marina. Their faces said it all as the clearly heathy "keeper" sized rock swam off in front of their eyes. After the accusations of cheating died down, I headed back to the seawall. By this time the winds had completely died down, but not before blowing a ton of water out of the river. The water was 3 to 4 feet below median low tide. It was non stop action until dark. I ended with 7 virtually identical twenty inch fish and had many more blow ups. It was like a mirror as the sun set behind me and the plug from my last cast was sent five feet in the air by one aggressive rockfish.
Posted by Rick Weaver at 10/16/2010 07:24:00 PM

Rick,
Good Anglin'! Would ya give me a call sometime?? Jeez I'm dying to catch some Stripers on the surface. I think my topwater presentation could use some refining. I can meet you anywhere on the South River.