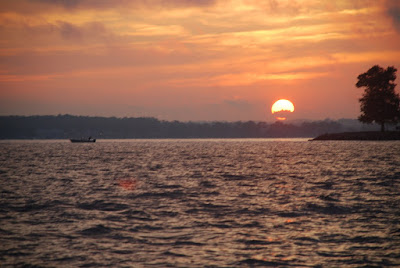 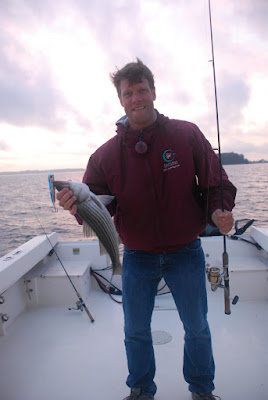 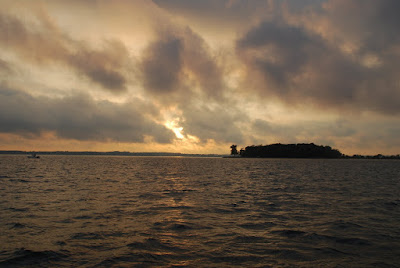 It had been raining non stop all day, but I was determined to get out there.My buddy James was still in town, so we planned on meeting at 3 PM. Fortunately, we both got tied up by life, so 3 became 5.30. At 5 I started looking for my rain gear, when I noticed that the western shy was beginning to brighten. It was breezy, but certainly not enough to keep us off the water. I arrived at the boat first an snapped off a picture of the first glimpse of blue sky. We pushed my Yammy to max RPM's and made it to the point in record time.We hoped to at least get in 45 minutes of good fishing. After anchoring up and making a few casts into the wind, we realized we were way under dressed. It felt like fishing Va Beach in December. We fan casted around the boat for the next half hour and finally deciding to call it a successful night just for getting to fish and enjoying a great sunset. Just as James pulled up the Anchor, I had a nice blow up that missed. It was hard to cast back into the spot as the wind was now howling with a fast moving ebb tide. We decided to drift for a while. After about 5 minutes James had a nice blow up and landed a 22. As soon as the fish hit, I hit the waypoint marker on my HDS8. It was now dark, but we decided to go back and drift one last time over the waypoint. Sure enough, just as we hit the waypoint, James had another blowup and boated his 2nd 22. Back to the dock at 7.30.
Posted by Rick Weaver at 10/14/2010 08:38:00 PM