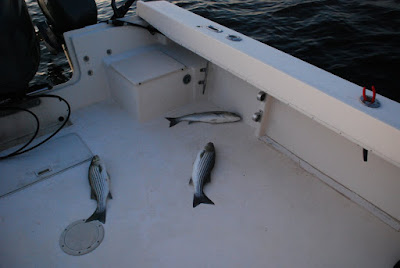 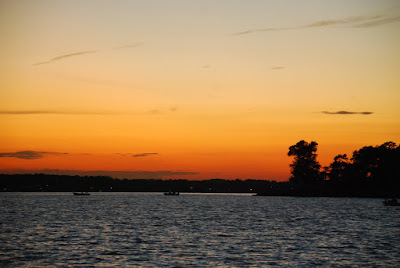 My buddy James from CA, called yesterday and said he would be in town today and needed a topwater fix. Unfortunately he was not landing until 4:40 and needed to stop at his parents house, down the street from me, to change.So, by the time we got to the dock it was already 5.45. We headed straight for the point and arrived a around 6:15. There was another boat on the fish already, so we tried to anchor up close enough, but give them their space. Unfortunately, like last night, the fish were staged in a very small area. Finally we found a comfortable spot, and James immediately hooked up to a 20. He continued to get several blowups as I fumbled around in the front of the boat with a perplexing line tangle. By the time I made my first cast the sun was disappearing behind Thomas point. This generally signals that the fish would shut down within 15 minutes or so. It did not take long to boat my first fish of the night. The next 10 minutes was fairly crazy with more blowups than hookups., but we did manage 3 more in the 18/20 inch class. The ride home almost made up for the short fishing window due to one incredible Oct. sky.
Posted by Rick Weaver at 10/13/2010 08:33:00 PM