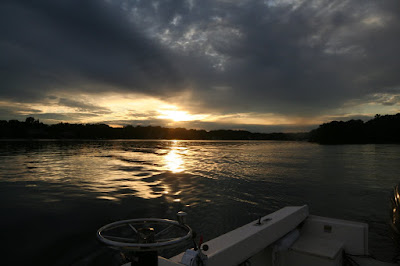 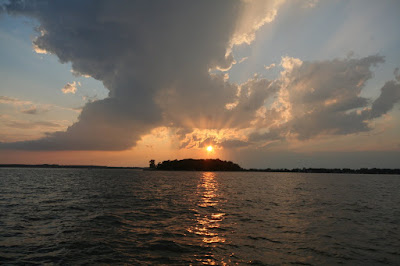 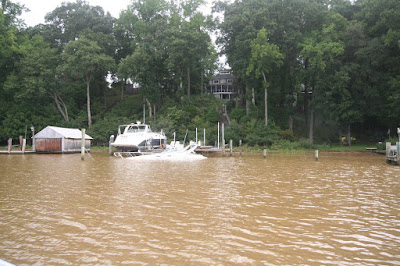 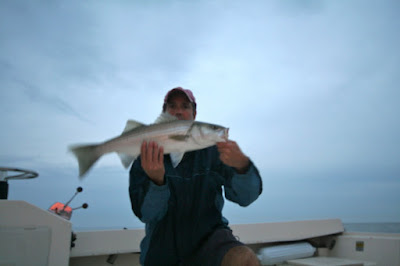 It was not long after Irene moved on that we were hit by tropical storm Lee and its 10 plus inches of rain. I can honestly say that the river has never been so un-fishable. It was surreal to see sunken boats and lumps of grass floating by. Needless to say, the last three weeks of fishing have been horrendous. The last fish I had caught, prior to tonight, was a 20 on labor day. It was really depressing because Sept. is normally the best month of the year for topwater and I was able to hook up with a number of old fishing buddies who went home empty handed.
The main stem of the bay has been even worse than the river since the Conowingo dam has been open. I tried the shoal a number of times, but the water was just too murky, so I have been fishing Lake Riva for the past 2 weeks. I left the dock around 5:30 tonight and hit all my normal spots. Since the river was like glass, I decided to give the shoal a try. There was one other boat there when I arrived at 6:30. On the other boat was a father and his young daughter. It was a beautiful sight to see them side by side working their plugs. As I set the anchor the dad had a nice blow up and handed the pole to his daughter to land what appeared to be a 20 inch class fish. It did not take long for me to get into the action. It was non stop action for the next 40 minutes. I boated 7 fish between 20 and 24. I really needed tonight!!!
Posted by Rick Weaver at 9/22/2011 08:17:00 PM