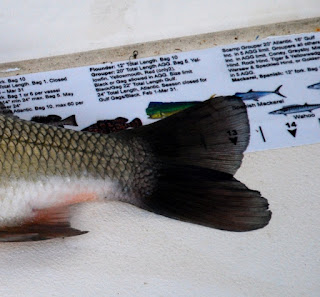 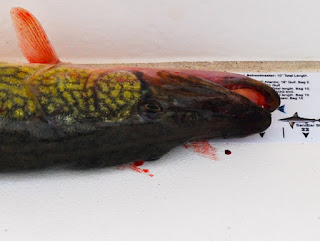 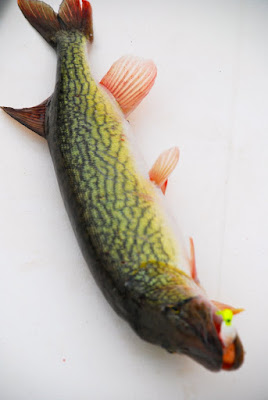 Last night my friend John K and I hit that headwaters of Broad creek looking for a few remaining Stripers. Although I continued to toss my trusty Stillwater, John stuck with plastic. I finally gave in and switched to a white twisty. Soon after, I picked up a small white perch. At our second stop, John picked up the biggest White Perch I have seen in the river...a fat 13 1/2 inch. It was not until we got home that he realized it was citation size (13 inch in MD). Nice!!
It did not take long this Thanksgiving for me to be booted from the house to go fishing, by the four women in my life. So I headed back to Broad Creek around 11 Am. There was quite a bit of bird action in the shallows, but I was unable to entice a blowup after an hour and half. At that point, I knew topwater fishing was basically over for the year {maybe}. I started working the white twisty near rocky shorelines at the mouth of the river. On my second stop I hooked into a Chain Pickerel that provided me with quite an air show. Turned out to be my second and biggest Pickerel ever...a nice 22 (citation size is 24). So it looks like fall fishing has given way to winter fishing on the South River. Happy turkey day.
Posted by Rick Weaver at 11/25/2010 01:31:00 PM