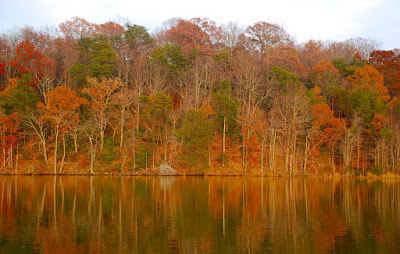 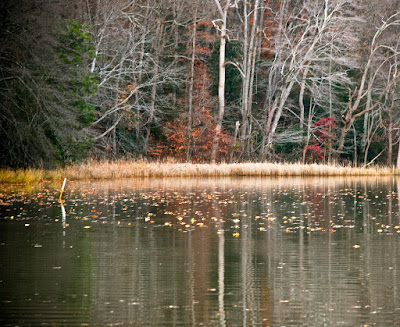 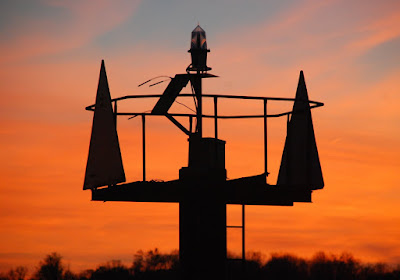 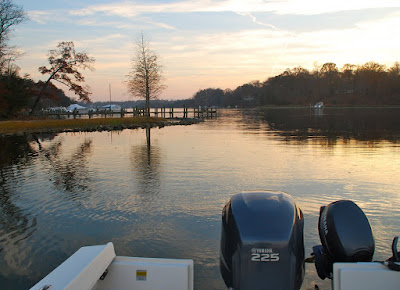 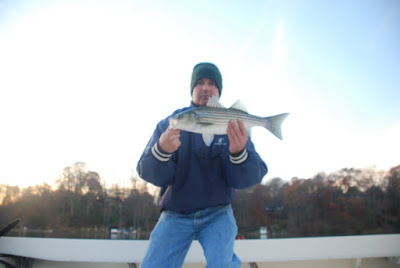 It has been nine days since my last post. This time included two solid weekends of fishing. That meant 4 "two a days" where I fished from 10 to 1 and 3-5 both Saturday and Sunday. All without a bump, nibble, swirl, blowup, or a bird sighting. Since it now get's dark at 5 , I had to work hard to catch the last hour of daylight each weeknight. Despite the lack of fish, it was a very pleasurable nine days. The sun and air temp made it feel like October never ended. Unfortunately it had. For a topwater guy like myself the conditions were tough. The breeze was extremely shifty, which made finding Stillwater difficult. Furthermore, when I did find a nice spot, I also found leaves sitting on the surface. The boat traffic on the 2 weekends was more like July than November, which also meant dealing with a ton of wakes. The weeknights on the other hand have been great. It has basically been me, the river, and some incredible sunsets.
This past Saturday I heard from two different duck hunting party's that there were Stripers busting bait on the surface at the headwaters of Broad Creek. I love fishing back there, but have never had much luck. The water is very mucky and shallow. The nice thing about the area is that it is completely protected from wind and noise. As the sun was setting Sunday night, I could hear the tell tell "swack", but the water was too shallow to get close enough. Last night the tide was a bit higher at sunset, so I was able to get a bit closer, but leaves removed any chance of a blowup. Tonight the tide was as high as it gets due to a full moon. As I came around the corner to the wide expanse that makes up the headwaters, there they were. It was a good sized baitball, just getting slammed. They were smack dab in the middle. When I got within 50 yards, fish took off in every direction. As they scattered they left a wake, which made the whole thing look like a flock of geese taking off. It looks like a kayak trip is in order. On my way back down the creek, I tossed a twisty into a promising looking point of living shoreline that was covered by leaves. A few turns of the reel and I finally had my 20. Now why didn't I think of that sooner? I am one stubborn topwater guy!!
Posted by Rick Weaver at 11/22/2010 08:00:00 PM

Rick,
Glad to hear you found them back in Broad Creek. They were going nuts on Saturday morning. I'll probably hunt that spot again this week. This time I'll bring my rod w/ me just-in-case.
Tightlines,
Brandon