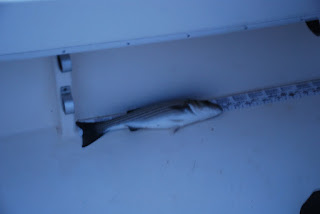 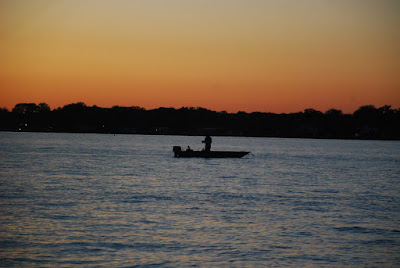 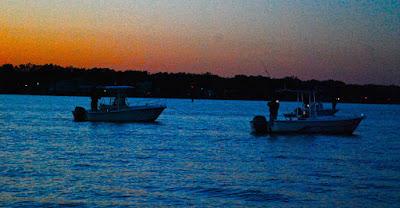 I was pulling into my driveway at 3:30 tonight, when my buddy Brandon called looking to do some pluggin. I picked him up at his dock a half hour later and headed out. We fished several new shorelines coming out of Crab Creek, with no luck, so we ran out to the shoal. Dabs was already there with a buddy. They had caught several fish, but they were small, and on plastics. The conditions were like a late August night except it was forty five degrees. There was a strong outgoing tide, light wind, and calm seas. We anchored on my spot and the plugs started to fly. It did not take long to realize the fish either were not there or were not looking up. One by one, the boys of summer began to show up until it really did feel like an August night. Every once in a while someone would yell that they had boated a fish, but they continued to be in the 18 inch class. Brandon picked up several fish on a yellow curly tail. After the sun set the yells of blowups began with Chris boating a 23. I finally had a nice blowup close to the boat, but the fish spit the plug directly back at me and into my wool hat. Dabs called to see how we were doing, and as I was talking another fish blew up on my plug floating by the side of the boat. Unfortunately, the action quickly died down, so we headed in. 3 fish...all on plastics.
Posted by Rick Weaver at 11/02/2010 09:14:00 PM