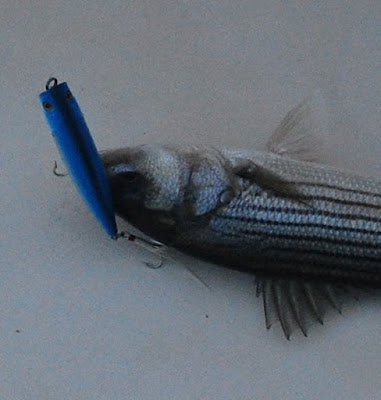 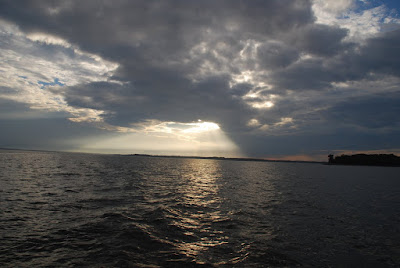 It had been raining all day, so I was pleasantly surprised when the skies opened up and the wind laid down at 4:30. The temp was a perfect 73, light breeze, and mirror like water. The problem was that every spot I tried was covered with leaves. There was just no way to get a plug through without snagging one. I made the decision to head out to Thomas Point. It was a good deal rougher, windy, and cold than I had expected. I started by drifting towards the mark and immediately picked up a 20 on a black Stillwater Jr. I tried anchoring with no success. Dabs showed up and anchored beside me. We gave up after 10 minutes and tried drifting once again. The water had got even choppier in the interim, so I switched over to the Stillwater Sr. On the first drift, I picked up and 18. At that point I was done with the bay and headed in for the calm of Glebe Bay. Worked both shorelines with no success and then headed in a bit early. Nice night to be out, but the leaves have to go.
Last night was also a bit frustrating. I fished with John and we had the same problem with leaves. Only managed one very skinny 18 on the north shore of Broad Creek.
Posted by Rick Weaver at 10/27/2010 07:19:00 PM

Thanks so much for the tips last week! We ended up with 2. The tide was horribly low at first but once that turned we started getting more action. My 5 year old caught his first Rockfish ever- 19 inches...he was psyched to say the least. thanks again.