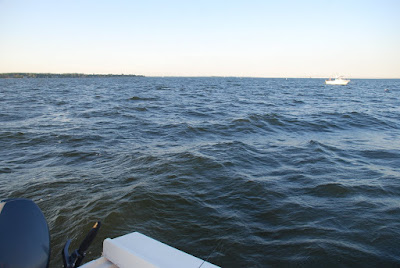 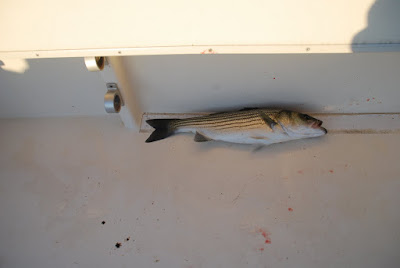 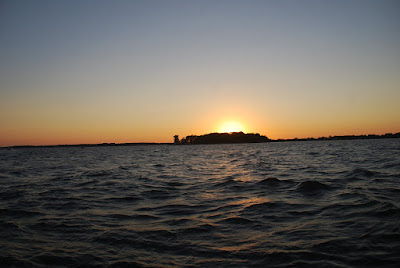 I left the dock at about 5:45 to sunny skies and and a light wind. I knew from reading the wind forecasts that things would be a whole lot different at Thomas Point. Just like last night, the tide was ebbing and the wind was from the north, so it was quite choppy when I arrived at my spot. The waves were 2 to 3 feet, but were expected to grow to 5 feet. The moon was full and it was a beautiful night, but unfortunately the forecast was dead on. It was the WORST conditions of the year by far. On my first cast I had a blow up that missed and the fish followed with several other attempts. It did not take long to boat his brother though. A very fat and healthy 22. I can honestly say it was non stop action the rest of the night. By far the BEST night of the year. Not sure of the exact count, but would say it was close to 20. Dab's called and said it was too rough for him to make it out, but he finally showed up around 7 with a buddy. They anchored right next to me and immediately started bailing fish. There were a number of newcomers that surrounded us, but I did not see many fish being caught. I think most casual fisherman to the shoal do not understand how shallow it gets in spots. There is not a specific area one needs to fish. It is more of a process. I only use topwater this time of year, so its hard to say if plastics or divers work, but I find you cannot cover enough water. On a night like tonight the only option is to toss with the wind on keep the plug in constant contact with the water. I keep my rod tip down (almost in the water) and use a fairly steady pop with several pauses on the way in. I am one tired guy right now. The pictures do not do justice to how rough the conditions were for topwater fishing.
Posted by Rick Weaver at 9/21/2010 08:24:00 PM