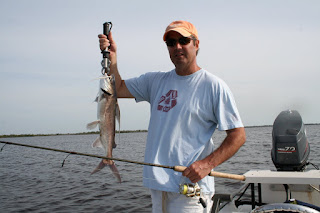 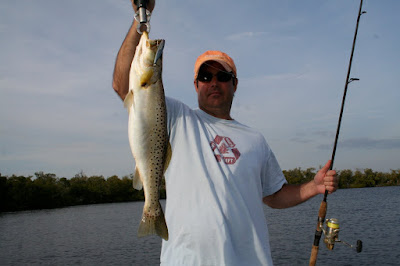 My wife and youngest daughter spent Easter weekend at the Gasparilla Inn in Boca Grande Florida. The concierge set me up with Captain Sandy Melvin. Sandy owns the Orvis shop in town and seemed genuinely excited about a all "topwater" charter. I met him at the marina at 2.30 and headed into the back country of Charlotte harbor. We were poling in 2 to 3 feet of water along the mangroves. It took a while, but we finally had a very nice blowup from a redfish that missed. Sandy seemed very excited and explained that the water had been too cold and this was a good sign. He estimated the fish to be in the 10 Lb range. Not long after that, I had another redfish blowup that came back around for a second try, but again missed. My heart was racing. About 15 minutes later I picked up my first fish of the day, a 2 pound speckled trout. They hit and fight a lot like a striper...lots of head shaking and the signature dance. My next heart stopper came from some kind of catfish that actually hit a plug and jumped like a bass. It was ugly but put up quite a fight. This was followed by another small trout. At around six I had a huge blowup but pulled the plug out the fish's mouth before hook up. I immediately threw back into the same spot and BAM "fish on". After a incredible show, I boated a beautiful 4 1/2 pound trout. Sandy said that it was the biggest he had seen all year and would put a pictue in the local Boca Beacon newspaper. A wonderful trip all around.
Posted by Rick Weaver at 4/04/2010 09:01:00 PM

Thats a great looking Trout! i usually never see trout that big, up in NH. I fish lake winnipesaukee and lake winnisquam in the lakes region.

Are you a friend of LIz? My daughter goes to UNH. If not how did you find my blog? I really want to do some fishing next time we get up there to visit.