My buddy Mikey from Boston always wears these long fishing pants and claims that "these things catch fish". I noticed that most of the guides in Florida wore the same pants. They said it was to keep the sun out. So today, my 51st birthday, I was pleasantly surprised to receive a pair from my baby girl Grace. I fished for a hour or 2 this am, but the sun was too high and the fish absent. I had a great day of burgers on the grill with family, while watching the "Crab Bowl" lacrosse championship between Loyola and Maryland.

I headed out tonight around seven. The boat traffic was still heavy, but most seemed to be heading in.  By 8 pm, I basically had the bay to myself. There was a strong incoming tide and a 10 knot SE wind. It was choppy, but workable. I stayed primarily with Papa Dogg. If I kept the rod tip up, the plug was able to walk across the water without nose diving. I had picked up several dinks and one barely legal 18, when Dabney called at 8:45 to see how things were going. I told him one more cast and then I would be heading in. As fate would have it, my last cast turned out to be the best of night as a nice 22 sucked the plug under and took quite a bit of drag as I fought against the tide. Great end to a perfect birthday. 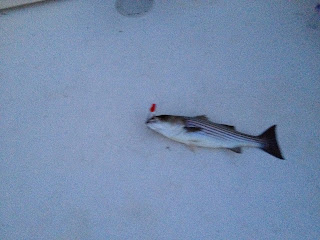 Hey Rick - did you switch web hosts? I tried to locate your blog and ended up at Cafe' Mom. Go figure.

Are you doing any fishing this summer? Haven't seen an entry
after May. What gives?? R/ Cy

Still using Blogger, but someone stole soutriverfishing.com when I absentmindedly let it expire. Luckily, I was able to pick up plugfishing.com, which I actually like a ton better.