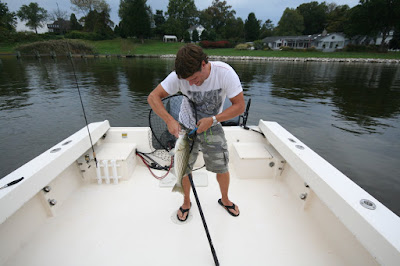 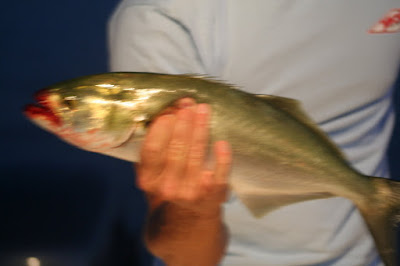 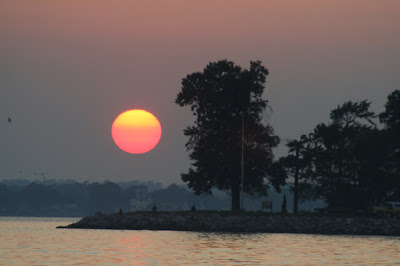 My buddy James is in town for a few days, so we headed out to Thomas Point the past 2 nights. Weds night we arrived at the "spot" at little after 5. The weather was perfect..82 degrees, light breeze, sunny skies, and STILLWATER. Almost immediately we got into the blues. Action was fairly steady, but the blues were all under 2 pounds. Just as the sun was setting we saw some birds working a few hundred feet off the point. We made our way over just as darkness was setting in and boy did we have a blast. If was a veritable bluefish frenzy. Fish were jumping out of the water everywhere. Jim picked up a very nice 4 plus LBR. Not one Striper all night.

Tonight was a totally different story. When we left the dock at 5 Pm the temp was still 83, but a cold front was pushing in. It was raining lightly but the breeze was light and water calm. On the way out we decided to try at least one river spot hoping to avoid the blues and get some Rock. Literally on the first cast I had a huge blow up from a fish that was at least a 24. The fish missed and a second fish slammed immediately...a 18. I was using a Jr Smack it and James the big Chug Bug. The next 1/2 hour I caught 9 sub legals in a row...James Nada. He was getting ready to switch over to the smaller plug when he had the biggest blow up of the night and boated a very nice 24. At this point a neighbor of mine came up in his boat. I had promised to show him the Thomas Point "spot" so off we went. Spent the rest of the night playing around the flats and only picked up 2 blues. So 2 lessons learned.."the bigger the plug the bigger the fish" and "never leave fish to find fish". The Rock are in the rivers. Let fall begin. Supposed to be in the 30's tomorrow morning.
Posted by Rick Weaver at 10/16/2008 09:09:00 PM